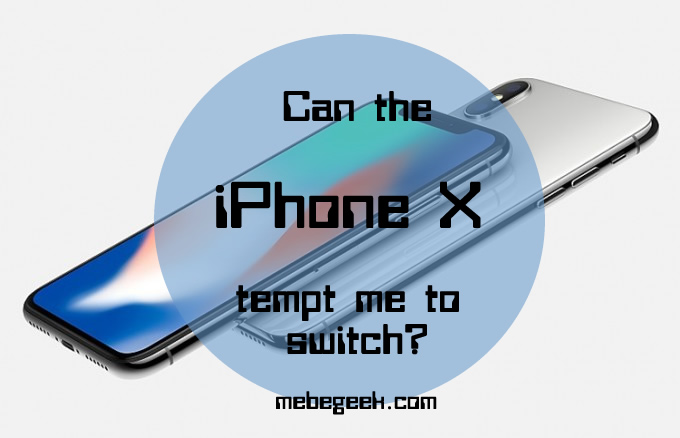 When you speak to anyone about phones or tablets, majority of people are either firmly sat in the Android or the Apple camp. I am avid user of Android and nothing had changed my mind. So when Three gave me the opportunity to loan and test out a iPhone X, I wanted to see if it could change my mind.

So Can the iPhone X tempt me over to Apple?

I have a Samsung Note 8, and like most people, being able to take photos, check my social media and keep in touch with family and friends is what I need in a phone. So with the iPhone X and the Note 8 on paper having similar specs it would make a good comparison.

Using social media apps, YouTube and browsing , there wasn’t any noticeable difference between the two phones. Maybe milliseconds but not enough to make a difference in my opinion. The battery was good on both phones but the Note 8 just came out on top but again not by much.

Both keyboards were easy to type, although the bigger screen on the Note 8 made it easier to type. In both the camera was easy to access, although I did experience the weird glitch on the iPhone where the camera rotated sideways. This meant I needed to restart the phone. Apps were easy to find and both App stores have their own quirks and layout . The Apple store only has approved apps though so tends to be more secure.

Both cameras have the same specs, so in theory should produce similar photos. The photos taken with the
iPhone produced deeper, richer colour than the Note 8, thanks to the Apple software. Both here crisp and clear photos however there was a noticeable difference when I took both along when we went pumpkin picking, The colours of the pumpkins in the photo was amazing.

Although I tried the face recognition on the iPhone, I experienced a few times it didn’t recognise me. This could be due to glasses change or not wearing them. I did miss having a fingerprint sensor. The Note 8 doesn’t offer face recognition but has a fingerprint sensor on the back of the phone, which although I like it being on the back it is so easy to finger smudge the camera.

The iPhone was not very easy to lock down if handing your phone to your child for a few minutes without installing an app. Where the Note was able to use the Android feature to lock the phone to an app.

Was it enough to convert me to Apple ?

The phone was good but no. The feel and look of the iPhone was stylish but both phones look great, have good specs and a battery you don’t feel like your always looking for a charger. I did love the photos that were taken on the iPhone, however I did notice photos taken with the iPhone where hard to access on other non apple devices. I couldn’t view the photos any other product unless it was my PC, whereas Google Drive was accessible on the iPhone.

Maybe the next iPhone might be able to tempt me, but not quite yet. If you already use Apple products, this has to be the best iPhone I have tested.

I was loaned a IPhone X from Three to do this comparison, as always all opinions are my own.

This website uses cookies to improve your experience while you navigate through the website. Out of these, the cookies that are categorized as necessary are stored on your browser as they are essential for the working of basic functionalities of the website. We also use third-party cookies that help us analyze and understand how you use this website. These cookies will be stored in your browser only with your consent. You also have the option to opt-out of these cookies. But opting out of some of these cookies may affect your browsing experience.
Necessary Always Enabled
Necessary cookies are absolutely essential for the website to function properly. This category only includes cookies that ensures basic functionalities and security features of the website. These cookies do not store any personal information.
Non-necessary
Any cookies that may not be particularly necessary for the website to function and is used specifically to collect user personal data via analytics, ads, other embedded contents are termed as non-necessary cookies. It is mandatory to procure user consent prior to running these cookies on your website.
SAVE & ACCEPT