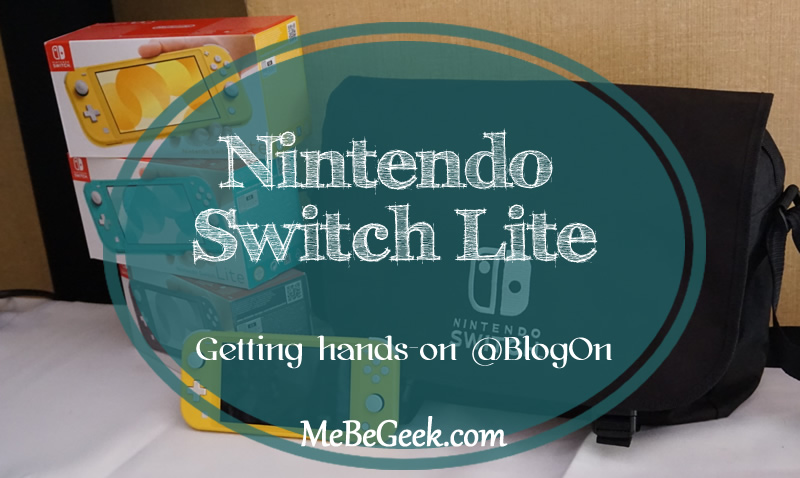 The day after the release of the new Nintendo Switch Lite, I got my hands on this lightweight and compact addition to the Switch family at BlogOn. Nintendo brought along some of these handheld consoles for us to play with.

When Nintendo announced the new console a few months ago, I had mixed feelings about it, the switch already had a handheld mode, so would the appeal be more for the reduced price tag?

Now it has been released and I have had my hands on this sleek well built, the purpose is more obvious. Priced at £199, the Switch Lite is designed specifically for handheld play. With the controls integrated into the console, it is compatible with any of the switch games that are played in handheld mode. I was glad to see the return of the + Control.

Getting Hands-on with the Switch Lite.

It is lightweight but really feels good in the hand. The joysticks have a really smooth movement, even more so than it’s predecessor. Like the switch, you can use multiplayer across the Switch range. The screen is smaller measuring 5.5 inches but still providing 1280 x 720 pixels so the quality is very good.

The Switch Lite is available in three colours and I have to say all the colours look a lot more appealing than the images online. The turquoise is my favourite out of the three options. With a more energy-efficient chipset the battery life is rumoured to be better, however, it was hard to tell how much this is true from the time I spent with it.

After being hands-on with the console, I am impressed with the overall design and feel. It is definitely worth a look and would be great not only for kids (like I originally thought when it was announced) but for anyone wanting a lightweight, portable handheld version of the Switch.

This website uses cookies to improve your experience while you navigate through the website. Out of these, the cookies that are categorized as necessary are stored on your browser as they are essential for the working of basic functionalities of the website. We also use third-party cookies that help us analyze and understand how you use this website. These cookies will be stored in your browser only with your consent. You also have the option to opt-out of these cookies. But opting out of some of these cookies may affect your browsing experience.
Necessary Always Enabled

Any cookies that may not be particularly necessary for the website to function and is used specifically to collect user personal data via analytics, ads, other embedded contents are termed as non-necessary cookies. It is mandatory to procure user consent prior to running these cookies on your website.